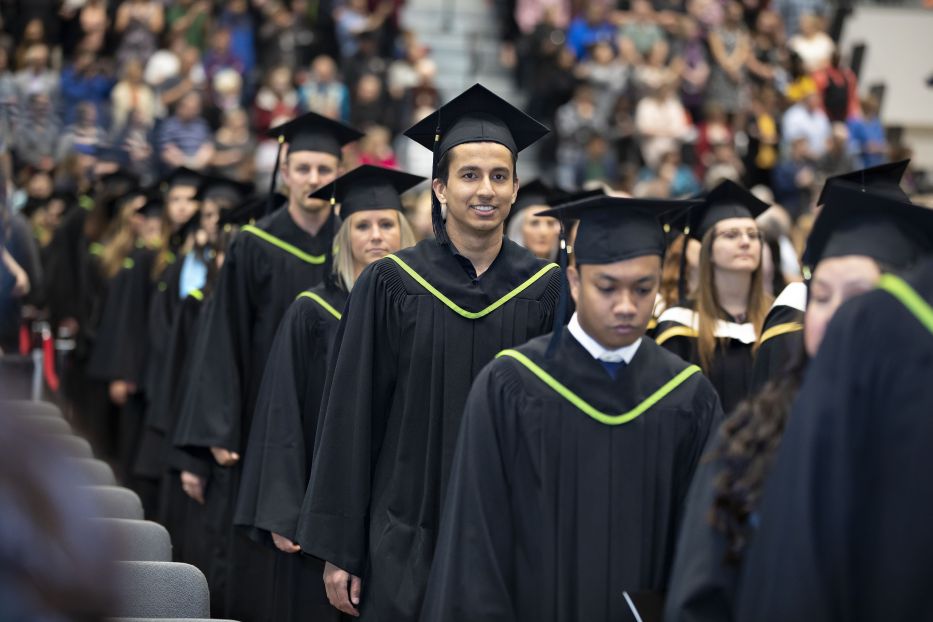 “This Convocation has special meaning for all of us at Red Deer Polytechnic. We honour the success of our graduates by coming together as a community – a Polytechnic community – to remember the past and celebrate the future,” says Jim Brinkhurst, Interim President. “This year, in addition to the graduates from 2022, we also have graduates from both 2021 and 2020 who have chosen to come to the ceremonies so they can cross the stage. This epitomizes the importance of Convocation and the meaning that it has for graduates.”

Throughout the morning and afternoon ceremonies, almost 500 of the 1,480 eligible graduates from 2022 will cross the stage, and nearly 50 graduates from the previous two years will also be part of the day.

During the afternoon ceremony, the Governor General’s Academic Medal (Collegiate Bronze Level) will be presented by Earl Dreeshen, Member of Parliament for Red Deer-Mountain View, to Brandon MacLean. With eight grades of A+ and a GPA of 4.0 in the final year of his Justice Studies Diploma, MacLean achieved the highest academic standing of any graduate from Red Deer Polytechnic’s diploma-level programs.

“Earning the Governor General’s Academic Medal speaks to Brandon’s dedication and hard work throughout his program,” says Kylie Thomas, Vice President Academic and Provost. “Brandon has identified that receiving this medal is a highlight for him and, when he reflects on his time at Red Deer Polytechnic, he also notes the importance of his classmates, friends and instructors in Justice Studies. Brandon's achievements and the connections he has made are very meaningful to him, and we are so proud that – as an institution – we have had the opportunity to be part of his journey.”

At Convocation, Red Deer Polytechnic will also continue a tradition that began in 2014 with the granting of an Honorary Degree to an individual who has made an outstanding contribution to the advancement of social, cultural or economic development in a way that has had significant impact for Red Deer Polytechnic, central Alberta and beyond. Jan Underwood will be the eighth recipient of the Honorary Bachelor of Interdisciplinary Studies Degree in recognition of her unparalleled and unwavering commitment to developing greater inclusion and intercultural awareness across communities in central Alberta.

“Jan epitomizes the criteria for a Red Deer Polytechnic Honorary Degree through her immense and inspiring work with people of all ages and from all backgrounds,” says Brinkhurst. “Jan has contributed her time and expertise across a wide range of projects at our institution, and through her role at CARE for Newcomers, she has worked with thousands of people from across the region. She is passionately committed to creating a better world, and it is our privilege to bestow upon her an Honorary Bachelor of Interdisciplinary Studies.”

Additional details about Convocation are available at rdpolytech.ca/convocation.