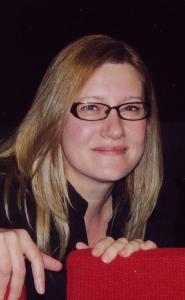 Dr. Carrie Dennett is a sociocultural anthropologist whose teaching portfolio primarily examines – from an interdisciplinary perspective – the relationship between social institutions and social justice, particularly topics of intersectionality, discrimination, and inequality as they relate to issues of gender, sexuality, religion, ethnicity, language, and race. As an instructor, she seeks to model enthusiasm for learning, promote the power of knowledge, and distill the importance of developing understanding, tolerance, and compassion for others.

Beyond the walls of Red Deer Polytechnic, Carrie is actively involved in archaeological research. She has contributed to projects in Canada, Honduras, and Nicaragua, with a current focus on the pre-Columbian archaeology of northwestern Costa Rica. In the lab, she specializes in the compositional analysis of pre-Columbian pottery from Central America utilizing complementary petrographic (microscope nerd) and geochemical (INAA) analyses as part of a decade-long collaboration with analyst Dr. Ronald Bishop of the Smithsonian Institution’s National Museum of Natural History in Washington, DC. The goal of this research is to scientifically model ancient economies and, drawing on a sociological perspective, to reconstruct artisanal communities of practice in Pacific Nicaragua prior to Spanish conquest in 1522. Alone and in collaboration with various colleagues, Carrie has presented and published nationally and internationally on diverse topics related to this and other research.

A strong focus on the development of interdisciplinary research design has led to engagement in a range of other collaborative scholarly experiences over the years. From 2012–2014, she held the Resident Mayer Fellow at Colorado’s Denver Art Museum, working to bring the Jan and Frederick Mayer Costa Rican collection attributions up-to-date and online for public access. In 2015-2016 she was awarded a postdoctoral scholarship at the Artic Institute of North America (University of Calgary) to assist with an edited volume on Iñupiaq-speaking Nunamiut communities of the Brooks Range in northern Alaska. For many years (2007–2015) Carrie also served as Managing Editor of the peer-reviewed journal Ancient Mesoamerica (Cambridge University Press) and has recently completed a two-term appointment to the Society for American Archaeology’s Publications Committee (2014–2020). Since migrating to Alberta in 2007 to undertake her doctorate degree, she has taught courses at the University of Calgary and the University of Lethbridge, as well as internationally at the University of Costa Rica.